The MESSENGER Gamma-Ray Spectrometer: A window into the formation and early evolution of Mercury 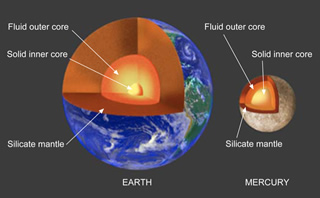 Figure 1. Schematic illustration of the interior structures of the Earth (left) and Mercury (right). The core of Mercury occupies a much larger fractional volume than does Earth’s core. Figure reproduced from Solomon et al., Space Sci. Rev., 131, 3-39 (2007).

In the mid-1970s, the Mariner 10 spacecraft made three flybys of the planet Mercury. The scientific observations that were made during those encounters formed much of the basis for our knowledge of the innermost planet prior to the arrival of MESSENGER. One of the most important findings was the confirmation that Mercury has the highest uncompressed density of the four terrestrial planets. This high density requires that the planet be made of material that has substantially more metal per unit mass than Venus, Earth, or Mars. In particular, Mercury’s core must occupy a markedly larger fraction of the total mass and volume of the planet than is the case for the other terrestrial planets (Figure 1). Despite Mercury’s metal-rich bulk composition, measurements of the spectral reflectance of the planet by ground-based astronomers indicate that there is very little iron within the silicate minerals of surface rocks and soils.

The conclusion that Mercury is a metal-rich planet with an iron-poor surface presents an important constraint on ideas for how the planet formed. In the three decades between the Mariner 10 and MESSENGER missions, planetary scientists developed a number of theories for the formation of Mercury in attempts to account for these observations. Several physical mechanisms that might have removed much of the outer rocky layers of the planet, leaving a smaller planet with a disproportionately large metallic core behind, were proposed. These mechanisms included evaporation of the outer layers by an early hot solar nebula and removal of most of the rocky shell by one or more giant impacts. Chemical explanations involving the formation of Mercury from different material than that from which Venus, Earth, and Mars accreted were also advanced. Thermal gradients in the solar nebula might have led to the formation of Mercury predominantly from material condensed at high temperatures, for instance, and other scenarios involved formation from primitive solar system material such as that found in certain classes of metal-rich chondritic meteorites. Each of these physical and chemical hypotheses predicts a different composition for the modern surface of Mercury, so measurements made by the MESSENGER spacecraft can be used to discriminate among formation models. 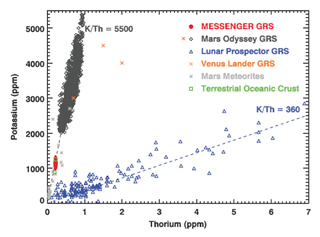 Figure 2. A comparison of the potassium (K) and thorium (Th) abundances on the surface of Mercury (the one-standard-deviation ellipse is indicated in red), the surface of Mars (as measured by the Mars Odyssey Gamma-Ray Spectrometer) Martian meteorites, the surfaces of the Moon (as measured by the Lunar Prospector Gamma-Ray Spectrometer) and Venus (as measured by gamma-ray spectrometers on Soviet Venus landers), and terrestrial oceanic crust. Lines of constant K/Th are indicated at values of 360 and 5500. The lunar values lie on the line with K/Th = 360, whereas the values for the terrestrial planets, including Mercury, cluster near the line with K/Th = 5500. Figure reproduced from Peplowski et al., Science, 333, 1850-1852 (2011).

The MESSENGER Gamma-Ray Spectrometer (GRS) is capable of measuring the surface composition of the planet from orbit by monitoring element-characteristic gamma-ray emissions from the surface (see the Science Highlights article Measuring Mercury’s Surface Composition). Of particular interest are measurements of the abundances of the elements potassium and thorium. These two elements emit gamma rays in the course of natural radioactive decay. In addition, their chemical properties are such that the relative abundances of these elements are little altered by magmatic processes, so the ratio of their abundances on the surface should reflect the ratio within the entire planet. These two elements do have an important difference, however; potassium is a moderately volatile element, whereas thorium is not. As a result, potassium tends to vaporize at much lower temperatures than thorium. As many of the proposed theories for Mercury’s formation involve extreme heating of the planet or its precursor materials, they therefore predict that potassium should be depleted relative to thorium. However, Mercury’s ratio of potassium to thorium as measured by GRS is similar to that of the other terrestrial planets (Figure 2), indicating that Mercury was not subjected to extreme heating during its formation or early evolution. This inference rules out most of the proposed formation mechanisms for the planet. Moreover, the measured ratios of potassium to thorium and thorium to uranium are similar to those of chondritic meteorites, supporting scenarios under which Mercury formed by the accretion of metal-rich chondrites.

Measurements of the abundances of long-lived radioactive elements on the surface of Mercury also have important implications for the thermal history of the planet. The radioactive decay of potassium, thorium, and uranium within the interior of the planet results in the generation of heat. This heat, and that remaining from the formation of the planet, was responsible for driving volcanic activity at Mercury’s surface. From the measured ratios of surface abundances of the radioactive elements and the known half-lives of the unstable isotopes of those elements, there has been a substantial decline in heat production within the planet over the past four billion years. This finding is consistent with the observation from imaging Mercury’s surface that extensive volcanic activity occurred early in the planet’s history and only limited activity has occurred since.