One of the primary science goals of MESSENGER is to study Mercury’s very thin atmosphere, or exosphere. Although observations of the exosphere from orbit have begun, these data must be carefully calibrated, and analysis is still underway. In the meantime, here is a primer on Mercury’s exosphere: what it is, how we observe it, and why it is important.

What Is Mercury’s Exosphere?

Mercury’s atmosphere is so tenuous that the atoms or molecules comprising it are more likely to escape from the planet or collide with the surface than to collide with one another. “Exosphere” is the term given to such an extremely thin atmosphere. Earth’s atmosphere also includes an exosphere, but that term applies only to the highest altitudes where our atmosphere blends into the near vacuum of space. At Mercury, however, the exosphere is the only atmosphere there is, and its lower boundary is the planetary surface. Mercury thus has what is termed a “surface-bounded” exosphere. To give one an idea of how thin Mercury’s exosphere really is, the surface pressure is 1/1,000,000,000,000th that of Earth’s atmosphere.

Where Does Mercury’s Exosphere Come from?

Mercury’s exosphere derives from a combination of planetary surface material, solar wind ions, and interplanetary dust particles that have impacted Mercury’s surface over time. The majority of Mercury’s exosphere is composed of atoms rather than molecules because atoms are easier to eject from the surface. Atoms of sodium, calcium (both neutral and ionized), magnesium, potassium, hydrogen, and helium have been observed in Mercury’s exosphere by MESSENGER, Mariner 10, and/or ground-based telescopes.

The processes that generate and maintain Mercury’s exosphere are illustrated in Figure 1. Low-energy processes include photon-stimulated desorption (PSD) and thermal evaporation. Both processes are the result of solar photons hitting Mercury’s surface. During PSD the solar photons directly release atoms from the surface; during thermal evaporation the photons heat the surface and the heat releases the atoms. Two high-energy processes — ion sputtering and meteoroid vaporization — result from the impacts onto the surface of solar wind and magnetospheric ions and small dust particles, respectively.

Because the atoms in Mercury’s exosphere do not collide with one another, once launched they follow ballistic trajectories under the influence of gravity. Atoms released with low energy generally return to the surface. Atoms released with high energy remain aloft for a longer period of time, which allows solar radiation pressure — the push by solar photons in the anti-sunward direction — to affect their trajectories. Radiation pressure affects different atoms to different degrees (e.g., sodium strongly, calcium weakly, magnesium insignificantly), so some atoms will eventually return to the surface whereas others will be accelerated far from the planet to form an extended comet-like tail. Most of the neutral atoms that make their way into the tail will escape the planet. At times, a sodium tail has been observed to extend more than two million miles from Mercury. Solar photons can also ionize atoms (by a process known as photoionization). Many of these photoions will be picked up by the solar wind and whisked away from the planet, but a fair number will be returned to the surface under the influence of Mercury’s magnetic field.

If all of the source processes for the exosphere were turned off, Mercury’s exosphere would disappear within a few days. That we always see the exosphere is testament to the dynamic nature of the interaction between the surface and the surrounding space environment.

How Do We Observe the Exosphere?

The primary means by which we study the exosphere of Mercury is through the observation of radiation emitted by the atoms. We observe what is called resonance emission, by which atoms absorb the energy of solar photons at a particular wavelength and then re-emit photons at that same wavelength. Because the wavelengths at which such emissions occur vary with the type of atom, each emission we observe carries a distinctive spectral fingerprint of a particular kind of atom.

The strength of the emission depends on the number of atoms we can see and a parameter called the g-factor, which is the probability of emission from an atom. G-factors can vary greatly among types of atom, so the brightest emission may not derive from the most abundant element. Although the observed emission brightness for sodium can be 100 times or more that of magnesium, for instance, the two types of atoms often have approximately equal densities because sodium radiates very efficiently whereas magnesium does not.

The Ultraviolet and Visible Spectrometer (UVVS) channel of the Mercury Atmospheric and Surface Composition Spectrometer (MASCS) instrument on MESSENGER was designed specifically to observe these atomic emissions. Figure 2 provides examples of such “emission line” observations by UVVS, as well as the spatial distributions of three species observed during MESSENGER’s third flyby. Differences in these distributions indicate that the controlling processes act on each constituent in different ways. UVVS will make hundreds of thousands of similar observations during MESSENGER’s orbital mission phase.

Why Is the Exosphere Important? 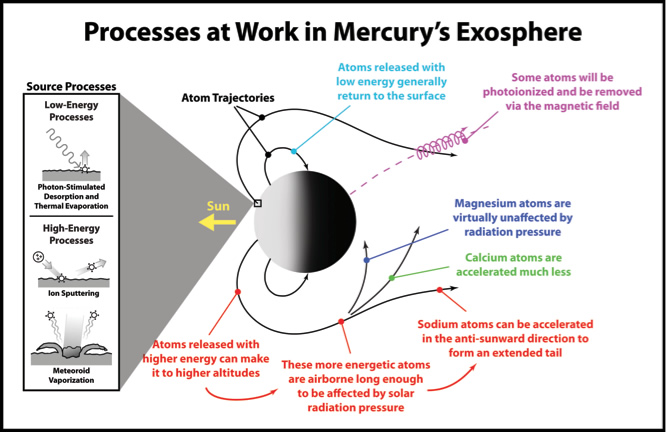 Figure 1. Schematic illustration of the processes that generate and maintain Mercury’s exosphere. Determining the relative importance of these processes through observations at different times and positions will yield insight into the interaction between Mercury’s surface and the surrounding space environment. 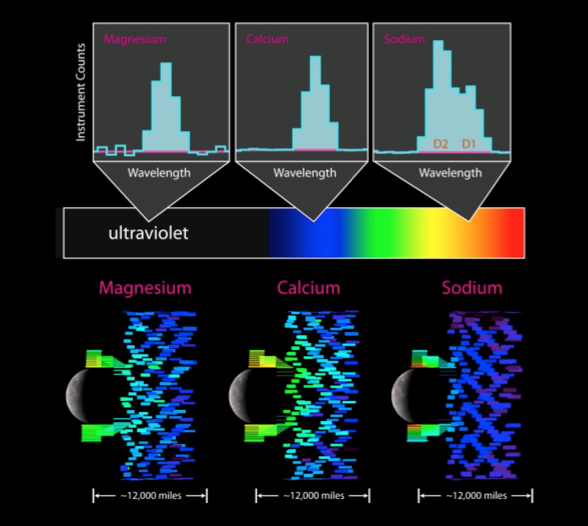 Figure 2. The top panels show typical UVVS “emission line” observations in Mercury’s exosphere from magnesium (left), calcium (center), and sodium (right) atoms. Each emission occurs at a characteristic wavelength. The three lower panels show the spatial distributions of emission from these three elements in the polar and tail regions of Mercury during MESSENGER’s third flyby. In these lower panels, color denotes brightness, the Sun is to the left, and individual rectangles indicate the region over which each measurement was made.