Mercury and its environment constitute a complex system that includes interactions among the interplanetary medium, the planet’s magnetic field, its tenuous atmosphere (or exosphere), and its surface. Mercury’s environment includes the solar wind and photon flux (flowing charged particles and light), solar and galactic cosmic rays, and the steady bombardment by micrometeoroids (solar system dust particles). The interactions of these elements of the space environment with the surface generate the observed exosphere and modify the physical, chemical, and mineralogical properties of the planet's surface layer of rock and soil, or regolith (Figure 1). This modification of the surface of a rocky body is commonly termed “space weathering”.

Accounting for the effects of space weathering on spectral and geochemical measurements of Mercury’s surface is important in deciphering the composition of Mercury’s crust and its implications for the planet's bulk composition and geochemical evolution. One of the major objectives of the MESSENGER mission is to establish what planetary formational processes gave Mercury its high bulk density, which implies a much larger fraction of metal than for the other inner planets. The several competing hypotheses for Mercury's high metal content predict different crustal compositions. Understanding the nature of Mercury’s crust will therefore provide insight into the processes that formed and produced the different compositions of the inner planets.

Figure 1. Summary of processes that contribute to the interactions between Mercury’s surface and the planet’s environment. These processes produce Mercury’s exosphere and weather the planet’s regolith.

Remote sensing measurements can provide information on the elemental and mineralogical composition of Mercury’s surface. MESSENGER’s science payload is measuring Mercury’s X-ray, gamma-ray, neutron, and ultraviolet to near-infrared spectral properties over a large portion of the planet’s surface. A challenge to the interpretation of these observations is to separate the signatures of planetary geochemical processes from those of space weathering processes.

Space weathering alters the spectral reflectance signatures of minerals by causing surfaces to darken, introducing a relative increase in reflectance with increasing wavelength (also called "reddening"), and diminishing or removing spectral absorption features. Comparisons of laboratory spectra of lunar surface samples with remote spectral observations of the Moon have provided the most extensive information on the mechanisms of space weathering. Submicroscopic, nanometer-scale particles of metallic iron are the main contributor to these spectral alterations (Figure 2). These metal particles, termed "nanophase iron (npFe0)", are found on the rims of regolith grains and within complex, glass-bonded soil particles called agglutinates. 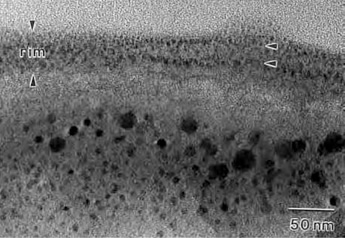 Figure 2. Transmission electron microscope image of a lunar agglutinate grain showing npFe0 both within the grain rim and within the interior of the grain. Arrows indicate multiple layers of finer-grained npFe0 within the rim. Within the grain interior the npFe0 particles are larger (~3 times the size of the rim grains). Credit: C. Pieters, Brown University.

The npFe0 particles are formed by multiple processes. On the Moon, impact of the surface by micrometeoroids and bombardment by solar wind ions (charged particles) are thought to be the two dominant processes. Impacting micrometeoroids melt and vaporize regolith grains. The vapors coat nearby grains, producing glassy, amorphous (atomically unstructured) rims or patinas. The iron in the vapor is changed by interactions with solar wind ions and by heating during the impact event through a process called chemical reduction, in which oxygen is removed. Reduction leaves behind metallic iron in the form of npFe0. The vapor deposition thus produces glassy, amorphous rims with embedded npFe0 particles.

Bombardment by solar wind ions chemically reduces the top few atomic layers of the grain by sputtering away the oxygen molecules and leaving behind the iron that forms into small metallic particles. Bombardment of the surface by ultraviolet light can produce similar effects. Mercury has a global magnetic field, which can limit the ability of solar-wind ions to reach the surface, whereas ultraviolet light (photons) is not impeded by a magnetic field. MESSENGER’s three Mercury flybys provided glimpses into the role of the magnetic field in directing solar wind particles both away from and onto the surface. Simulations of these interactions indicate that access to the surface by solar wind particles varies strongly with time and location.

Most of our ideas concerning the effects of space weathering on Mercury’s surface come from extrapolating from what we know about the Moon. There is some evidence that solar-wind bombardment, rather than micrometeoroid bombardment, is the dominant agent of space weathering on the Moon, as well as on asteroids. The micrometeoroid flux is believed to be at least 5 times greater on Mercury than at the Moon. Because Mercury is closer to the Sun, however, solar wind and photon fluxes are also at least 5 times higher than on the Moon. Thus the dominant processes on the Moon and asteroids both operate at a potentially increased rate on Mercury, and which process is more important on Mercury is not yet clear. The observations returned by MESSENGER from orbit will enable us to quantify rates of these processes on Mercury relative to lunar and asteroidal environments.