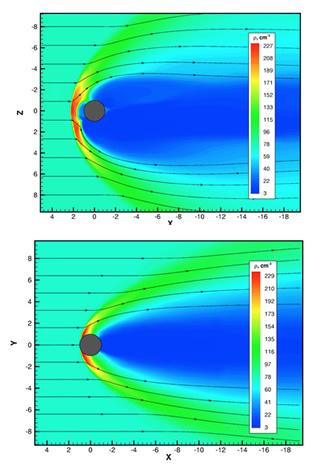 Figure 1. Numerical simulations of solar wind plasma density in the vicinity of Mercury during normal solar wind conditions (top) and during a very fast coronal mass ejection (bottom). Shown is a cross section of Mercury’s vicinity in the plane that contains the Sun-planet line and Mercury’s spin axis; the Sun is to the left, and north is up; distances are shown in units of Mercury’s radius. Under normal conditions, Mercury can hold off most of the solar wind from hitting the surface, although some entry can occur in polar regions. During a CME, the magnetic field is pushed back toward the planet and hot solar plasma can gain direct access to Mercury’s surface.

The Sun is continually hurling its atmosphere into space, forming a solar wind that fills interplanetary space with charged particles or plasma. Now and then, there are major explosions in the solar atmosphere that release a large flux of plasma with speeds up to 3000 kilometers per second. As the closest planet to the Sun, Mercury has a ringside seat on these events.

Under normal conditions, solar wind does not reach Mercury’s surface. Mercury’s magnetic field, although weaker than that of Earth, generally deflects the charged particles around the planet. Because solar wind is supersonic, this boundary that Mercury’s magnetic field presents to the interplanetary medium is abrupt, marked by a sonic-boom-like phenomenon called a bow shock where solar wind particles are forced to go from supersonic to subsonic speeds as they are steered around Mercury. A numerical simulation of this process is shown in the top panel of Figure 1. Near Mercury’s poles, solar wind plasma has easier access to regions close to the planet and sometimes even reaches the surface (see the area near the north pole for this particular simulation). These high-latitude regions near Mercury are somewhat analogous to the auroral regions of Earth.

The Fast Imaging Plasma Spectrometer (FIPS) measures the energy and the angular and compositional distributions of plasma ions near Mercury and in Mercury’s vicinity of the interplanetary medium. A component of MESSENGER’s Energetic Particle and Plasma Spectrometer (EPPS) instrument, FIPS (Figure 2) functions as a fisheye lens for charged particles in space. Particles enter the instrument from many directions. They first encounter the sensor’s electrostatic analyzer (ESA), which determines the direction of approach and the energy per charge of each particle. The ESA also shields the sensor from high-energy solar radiation such as bright solar ultraviolet radiation or X-rays. 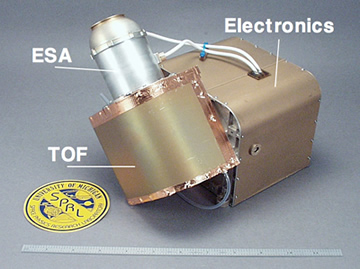 Figure 2. The Fast Imaging Plasma Spectrometer (FIPS) provides two simultaneous measurements for each particle. It measures the energy per charge in the electrostatic analyzer (ESA) section and the speed of particles in the time-of-flight (TOF) section. The functions of the electronics box are to support these measurements, control the instrument, and translate the data for transmittal to Earth for analysis. This sensor was built at the University of Michigan.

Given the energy per charge for a particle, one more measurement is needed to determine the particle type, and that is the particle's speed, which is typically between 100 and 5000 kilometers per second. Speed is measured in the FIPS time-of-flight (TOF) section (Figure 2). This information, together with that from the ESA, reveals not only the type of charged particle, but also the density, velocity, and temperature of each of the plasma components. The electronics section of FIPS supports both of these functions. This compact sensor is less than three pounds in weight.

Measurements from an early orbit about Mercury illustrate the workings of the sensor. Two views of that orbit are shown in Figure 3. The figure indicates those portions of the orbit when MESSENGER was in the interplanetary solar wind, those portions when it was inside Mercury's bow shock, and those portions when the spacecraft was within Mercury's magnetosphere, the volume of space within which the magnetic fields are dominated by that of the planet. 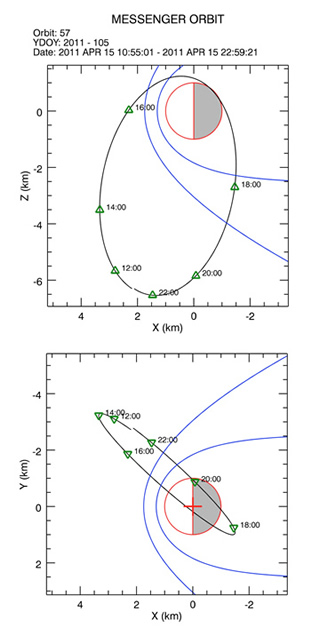 Figure 3. MESSENGER’s orbit from 10:55 to 22:59 UTC on 15 April 2011 (day of year 105). Two projections are shown. A projection onto the plane containing the Sun-planet line and the planet’s spin axis is at the top; the Sun is at the left and north is up. A projection onto the planet’s orbital plane is at the bottom; the Sun is again to the left. The projection of the orbit is shown as a black ellipse. The blue curves show the average positions of Mercury’s bow shock and magnetopause. The green triangles indicate times in UTC for comparison with the orbital observations shown in Figure 4.

Measurements made by FIPS, and by MESSENGER’s Magnetometer (MAG) instrument, during a portion of the orbit depicted in Figure 3 are displayed in Figure 4. 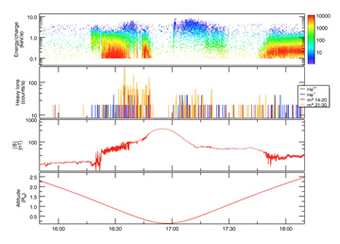 Figure 4. Plasma and magnetic field observations made during the near-Mercury parts of the orbit shown in Figure 3. The top panel shows proton plasma measurements from FIPS; the color scale denotes the total flux of these particles within a given interval of energy per charge. The second panel shows heavy ions within different ranges of mass per charge (m*), also measured by FIPS. The third panel shows MAG measurements of magnetic field strength. The bottom panel shows MESSENGER’s altitude during passage near the planet, measured in units of Mercury’s radius (RM).

The top panel in Figure 4 shows the FIPS measurements of protons (ionized hydrogen). Because FIPS is mounted behind MESSENGER’s sunshade that shields most instruments from heating by the Sun, some directions are blocked from observation. FIPS nonetheless has no difficulty detecting the hot plasmas and particles that come from near the planet. The hot plasmas coming from the volume of space between Mercury’s bow shock and the magnetopause, the outer boundary to Mercury’s magnetosphere, are readily visible as the multicolor bands in the top panel. Yet the top panel also indicates that there is a substantial plasma concentration near the planet in Mercury’s northern polar region, in broad agreement with model simulations such as that in Figure 1.

As shown by the second panel from the top in Figure 4, FIPS measurements of heavy ions indicate that these polar regions contain particularly high levels of ionized particles too heavy to have come from the Sun. These heavy ions (grouped in the figure by mass per charge (m*) near that for singly and doubly ionized helium and singly ionized oxygen and sodium) must be derived from the surface of the planet. 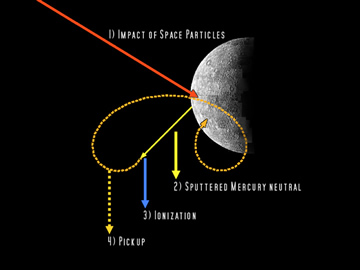 One route for the formation of such a particle is illustrated schematically in Figure 5. When a charged particle or a micrometeoroid hits the surface of Mercury, a neutral particle can be knocked off the surface. This “sputtered” particle follows a ballistic trajectory around the planet until it is ionized by solar radiation or by collision with another particle. Now carrying a charge, the particle suddenly “feels” the draw of the electromagnetic forces surrounding the planet, and it is pulled up into space, where FIPS waits to sample it in orbit about the planet. Other source processes are also possible. For example, high-energy electrons can knock a charged particle loose from the surface, or volatile materials can be evaporated during heating of Mercury’s dayside surface.

It is noteworthy that heavy ions, derived from Mercury’s surface, are observed throughout the magnetosphere on all orbits (Figure 4, second panel from the top).  This finding indicates that the ion generation process must be active essentially continuously.

As noted above, the processes that lead to heavy ions near Mercury are also those that contribute to Mercury’s neutral exosphere and to the “space weathering” of Mercury’s surface. As the MESSENGER mission progresses, we can look forward to exploring the many manifestations of these processes and how the observations from the spacecraft’s many instruments are strongly interlinked.