MESSENGER’s Mercury Laser Altimeter (MLA) uses a laser to measure the distance from the spacecraft to Mercury’s surface. The instrument sends a laser pulse to Mercury and measures the time it takes the light to bounce off the surface and return. Because we know the speed of light, we can convert the round-trip time to distance. Because we know the positions of the MESSENGER spacecraft and Mercury, we can determine the height of the terrain illuminated by the laser spot on the surface.

The laser sends pulses separated in time by about one-eighth of a second and provides measurements that are usually spaced about 600 meters (about 660 yards) apart on the surface. The MLA is sufficiently powerful to measure spacecraft-to-surface distances up to about 1,600 km (1,000 miles). When the laser beam hits Mercury’s surface, its footprint (or spot size) is between 15 and 100 meters in diameter, depending on distance, so MLA measures the average distance between the spacecraft and the surface over this area. The relative accuracy between measurements is better than 10 centimeters, (4 inches). A track from MLA, shown in Figure 1, contains the height measurements from one pass over Mercury’s surface.

Figure 1.MLA’s first measurements from Mercury orbit. This profile extends almost 5,000 km across the surface. The colors on the track show surface altitude relative to Mercury's average radius, estimated to be 2,440 km. The inset shows an expanded view of the very deepest portion of the profile. The arrow points to the crater shown in Figure 2.

Like all instruments on MESSENGER, MLA provides information for several different science investigations. The range measurements from MLA will be used to recover the overall shape of the planet, which helps determine Mercury’s interior structure. When MLA tracks cross deformational features such as ridges or scarps, the topographic profile provides information on how the landscape has adjusted in response to shortening or stretching of the crust. Comparing the change in elevation from one MLA measurement to the next gives an estimate of the roughness of the surface.

One of the most important tasks for MLA is to measure the depths of craters that are near Mercury’s north pole. Radar images of Mercury’s polar regions obtained as many as 20 years ago by radio telescopes on Earth show that the floors of many of these craters contain material that reflects radio waves very well (Figure 2). Many scientists believe that these reflective polar deposits consist of water ice, but whether this is the correct explanation remains to be proved. Because Mercury’s surface reaches temperatures as high as 450° Celsius (800° Fahrenheit), this explanation may seem surprising. However, the floors of craters near the poles are thought to be in permanent shadow, shielded from sunlight throughout the Mercury day and year. This situation arises because Mercury's axis of rotation is oriented nearly perpendicular to the planet's orbit, so that sunlight strikes the surface near the poles at a near-grazing angle. Because Mercury has no appreciable atmosphere, these areas without sunlight remain extremely cold.

MLA will test whether these craters are sufficiently deep that the floors are indeed in permanent shadow. Most of the craters are small, however, and it is challenging to aim MLA with sufficient accuracy to obtain a profile across the crater floor. The science team decided that a promising approach would be to obtain as many laser tracks as possible near the north pole and then to search for those measurements that fall inside shadowed craters. 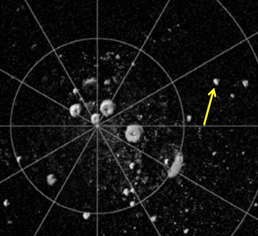 Figure 2. Radar image of polar deposits near Mercury’s north pole. The radar-bright areas coincide with the floors of near-polar impact craters. The arrow points to the crater crossed by the MLA profile during its first operations at Mercury. The image is from J. K. Harmon, M. A. Slade, and M. S. Rice, Icarus, 211, 37–50, 2011.

This plan turned out better than expected. On the very first pass, shown in Figure 1, the laser track passed directly across a small, deep crater with a floor that is highly reflective to radar, one of the candidate locations for water ice (arrow in Figure 2). The low, blue part of the track (arrow in Figure 1 inset) is the portion within the crater. The crater floor displays the lowest elevations along the track and is sufficiently deep for the floor to be permanently shadowed.

Throughout MESSENGER's one-year primary mission, many more MLA measurements of floor depths of craters near the north pole are expected. With these data, we will be able to test whether the imaged locations of strong radar reflections always coincide with areas in permanent shadow.