MESSENGER carries a Gamma-Ray Spectrometer (GRS) that is capable of measuring and characterizing gamma-ray emissions from the surface of Mercury. Just like radio waves, visible light, and X-rays, gamma rays are a form of electromagnetic radiation, but with higher energies than those other types of radiation. Gamma rays coming from Mercury carry information about the concentrations of elements present on its surface, so observations from the MESSENGER GRS are being used to determine the surface composition of the planet. These results will then be applied to studying the formation and geologic history of Mercury. 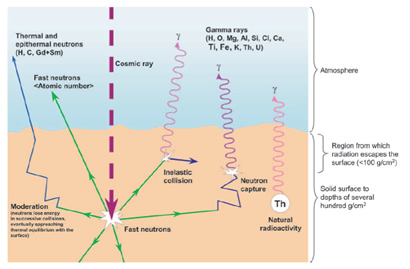 Stable elements (e.g., iron, silicon, and oxygen) do not spontaneously release gamma rays, so they are not normally detectable with a gamma-ray spectrometer. However, because Mercury lacks a substantial atmosphere, its surface is constantly bombarded by galactic cosmic rays. Cosmic rays are primarily high-energy protons, and when they collide with the surface they produce neutrons that subsequently excite elemental nuclei through such processes as neutron scattering and neutron capture. The normally stable nuclei, converted to unstable “excited states,” emit gamma rays to shed the extra energy they received from the neutrons as they return to their stable forms. Each element emits gamma rays at diagnostic energies during this process, enabling the MESSENGER GRS to determine the surface abundances of such elements from a spectrum of gamma-ray flux versus energy.

The MESSENGER GRS detects gamma rays having energies from 300 to 8000 keV with a cylindrical block of high-purity germanium (HPGe). When a gamma ray enters the HPGe crystal, it ionizes germanium atoms, and a measurement of the number of ionized electrons reveals the deposited gamma-ray energy. The ionization signal in the HPGe crystal is very small and can be overwhelmed by the thermal motion of germanium atoms. To reduce this “noise” associated with the thermal motion, the HPGe crystal is cooled to cryogenic temperatures. Such cooling requires that the MESSENGER GRS instrument include a mechanical cooler and heat radiator in order to keep the crystal temperature near 90° Kelvin (below -300° Fahrenheit).

Figure 2. Two example gamma-ray spectra acquired by the MESSENGER Gamma-Ray Spectrometer, with gamma-ray count rates shown as a function of energy (keV, or kilo-electron volt, is a unit of energy). To the left is shown a gamma-ray spectrum collected while MESSENGER was far from the planet; to the right is a spectrum obtained close to the surface (less than 2000 km altitude). “BG” denotes background gamma-ray peaks. Two particular gamma rays, at 1460-keV resulting from potassium and at 1779-keV resulting from silicon, are highlighted, as they show clear enhancements near the surface. These data demonstrate the presence of potassium and silicon on Mercury's surface. Other unlabeled peaks in the gamma-ray spectra in this energy range result from galactic cosmic-ray interactions with the spacecraft and detector material.

The MESSENGER GRS is now collecting gamma rays from Mercury's surface. As an example of data acquired by the GRS, Figure 2 compares gamma-ray spectra taken far from Mercury (left) with spectra obtained close to Mercury (right) in the energy range 1000 to 2000 keV. This energy range includes examples of the two types of gamma rays discussed above. Potassium gamma rays, at an energy of 1460 keV, are emitted during the radioactive decay of potassium atoms. Silicon gamma rays, at an energy of 1779 keV, result from neutron-inelastic-scattering reactions of cosmic rays with silicon atoms. Both types of gamma rays show larger intensities near Mercury and therefore indicate the detection of these elements from Mercury's surface. Other elements within the detection capability of GRS include iron, titanium, oxygen, thorium, and uranium. Converting the measured gamma-ray intensities to elemental concentrations requires a detailed analysis that accounts for factors such as reaction probabilities, detection efficiencies, variable viewing geometries, and background gamma rays. The MESSENGER Science Team is carrying out these analyses determine the composition of Mercury's surface materials and their implications for planetary formation and evolution.